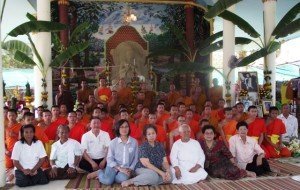 In Australia, Thai Buddhism was found by the Buddhist organization of New South Wales. The President of the organization, Mr. Chards Night requested to the religious department of Thailand to bring monks to Australia. After 3 years of consideration the Thai monks community (Sangha) until 16 April 1969 (2512 BE), the monks of Mahamakut Buddhist University accepted the invitation from Mr chards Night. There were only afew monks who had stepped on Australian land for the first time. They are as followed: Chaokhun Phra Sasanasophon ( Now His Holiness supreme patriarch of Thailand) Phra Thepkavi (somdet yanovarodom) and Mr. Prasan Thongphakdee, Chairperson of religious studies arrived in Australia in search of Buddhist relationship and propagate the Dhamma.

Thai Ambassador to Australia Mr. Prasong Bunchom and the president of the Buddhist organization of New South Wales welcomed Chaokhun Phra Sasanasophon and his colleagues.In Sydney, the biggest city of Australia, the majority of people were Christian background and also many Buddhist could be seen. However, the main Buddhist people come from Thailand, Sri-Lanka, Burma, Laos, Cambodia, and China.

The first Thai monks settled down in Sydney

In April 1973 ( 2516 BE), Mahamakut Buddhist University had sent two missionary monks to Sydney. Venerable Chaochun Phra Pariyatkavi of Wat Rajbophit and Venerable Khantipalo who was an English monk of Wat Bovanives Vihar, together with a layman was invited by Mr.Chards Night from the Buddhist Organization of NSW.

Venerable Chaokhun Phra Pariyatkavi who was later well known and much familiar among the Buddhist people in Sydney because of his friendliness devotion and contribution, many Buddhist could achieve happiness and he had played an important role in sustaining Buddhism in Australia.

After a year of spending time at the rains-retreat in Sydney, Venerable Phra Pariyatkavi returned to Thailand and Phra Mana Samniang of Wat Bovanives from Bangkok, arrived in Sydney which has also been a great benefit for many human beings.

The place for the permanent dwelling for the monks was uncertain, so the Mahamakut Buddhist University ordered monks and Buddhist people to find a proper house/land to have shelter for the monks. Venerable Khantipalo, Venerable Phra Maha Samniang and Venerable Phra Maha Samai found a space in Stanmore near the airport which was a 2 storey building with a wide garden which seemed to suit the monks to establish a monastery. The land was donated by Khun Ying Lamun Minanand , about 1,500,000 Baht and from other donors donated around 258,250 Baht. Altogether total $ 65,000 Australian dollars purchased.

His Holiness Somdet Phra Yanasamvara on behalf of his majesty, the king of Thailand naming a temple was “ Buddha Rangsee” which means the light of the Buddha. His majesty the prince of Thailand was honored and official visit for the opening ceremony of the newly found first Thai monastery in Australia in 25 May 1975 AD (2518 BE)

After a year of spending time at the rains-retreat in Sydney, Venerable Phra Pariyatkavi returned to Thailand and Phra Mana Samniang of Wat Bovanives from Bangkok, arrived in Sydney which has also been a great benefit

Thus, the great impact of Thai Sangha toward Australian community and Buddhist meditation guided by venerable Ajarn Bunrid Pandito who spent rains-retreat and contributed to the international Buddhist community in Ningbing Town, NSW. Many of his followers decided to ordain in Thailand even though many of them had been disrobed nowadays but still they are good Buddhist as well.

On the sixth of December 1976 ( 2519 BE) Venerable Luang Poothasek and his followers Phra Steven and Dr. Chavadi assisted the Australian people who were interested in Buddhism.Venerable Luang Poothesak who had a charming face and a good monk. His Dhamma talks with smooth voice and compassionate heart impressed many people. He was also a disciple of late Venerable Lunag Poomun of Thailand.

At that time, after reciting Patimokha by Venerable Phra Susobhana, a Nepalese monk and Venerable Lung Poothasek gave a Dhamma talk saying, he was delighted to be with Dhamma friends who live far away from home. In ancient time the propagation of Dhamma was a duty of enlightened monks who were far from defilements and devotion their whole life for the Dhamma, for the benefit of living beings and no-one would blame them because they had been practicing in accordance with right duty and morals. Now at the present time, we were just fully ordained monks propagating the Dhamma. If we were not mindful enough on practicing in accordance with the duty and moral conducts which was also the path of our masters, he added ‘I am afraid of monks being rotten potatoes sold in the market…’

Since 1977 AD (2520 BE ) his holiness Somdet Phra Yanasomvara and his colleagues Chaokhun Phra Dhammadilok, Phra Prakat Dhammakhun ( wat Palelai Singapore) and Phra Khrupalad Sombhipat yanacharn, a secretary of this Holiness, continuously visited at wat Buddha Rangsee, Sydney. The great compasssion of His Holiness and his colleague, Chaokhun Dhammadilok, a chief monk of Dhammaduta, missionary monks in Indonesia and Australia. The Mahamakut Buddhist University took this opportunity and donated to expand the land for monastery in Australia. Since 1976 AD – 1978 AD (2519-2521 BE) received donations from the Buddhist devotees, all together is about 77,000 A$ and purchased 12 Rai of land in Leumeah Cambell Town in August 1985 (2528 BE). The total cost of this land was 93,000 A$ In 1978 AD (2521 BE) Phra Khantipalo had founded another Buddhist monastery in the north Sydney ( Dharung National Park) , donated by Australian Ms Elsa.

In 1980 AD (2523 BE) at Wat Buddharangsee Sydney, five Sangha members resided during the rains retreat. This was the remarkable Thai Buddhist history in Australia for the first time had ever got Bhikkhu Sangha (monks’ community). And in 1982 AD, Khathina Dana, robe-offering ceremony after the seven years of establishment of the monastery.

Since 1976 AD ( 2519 BE) many Buddhist from Laos, Vietnam, Cambodia flocked down to Australia. This was the other reason why Buddhism was flourishing continuously and increased devotees at Wat Buddharangsee Sydney. In those days, many people interested in Buddhism and invited monks, Venerable Phra Suvirayan and Phra Yoi Pussiyo came to spend time in rains-retreat They hired a house for temporary resident at 400 Spring Vale Rd. Forest Hill in Melbourne. Finally, they established ‘Buddhist Foundation’ in 1986 and Wat Dhammarangsee and was given the name by His Holiness Yanasamvara of Thailand. This was the first Thai Buddhist Temple in Melbourne.

Buddhist Association of Adelaide had also decided to buy a house to build a monastery in 1984 AD, but it was impossible without money. Finally, a pious, Dr. Fong and his family donated property to establish the Buddhist monastery at 45 Smith Street Thebarton. It was well known that a couple of years ago, phra Ajarn Boonrit came to run a meditation retreat in Adelaide since 1982 AD (2529 BE). However, Ratana Pradip Temple had officially opened in Vesak Full Moon Day in 1986 AD (2529 BE). After all, Dr. Fong and his family donated another building beside the land to expand the monastery area. So that it will have enough space for the monks and lay people to practice Buddhism in the future.

The rapid increasing of Buddhist monastery also helped to propagating the Dhamma to the local inhabitants. In 1987 AD (2531 BE) established another Buddhist monatery, Wat Pa Buddha Rangsee and construction completed in February 1988 AD (2531 BE) and celebrated in the same time of the 200 years of Foundation Day of Australia. During the official ceremony, many senior monks from Thailand arrived and also the mayor of Canberra, and other Australian government officers made this ceremony successful. Besides fertilization of Buddhism, in 1990 AD (2533 BE) the first Buddhist pagoda in Sydney had been built in Wat Pa Buddharangsee. This became a symbolic Buddhism in Australia.

After all, Phra Ajarn Yantra visited Australia who was once a famous monk (now disrobed) of Thailand. He spent rains-retreat in the north Sydney and secondly in Bandanoon, 150 km away from Sydney. One of the Australian lady Elisabeth donated the 100 acre of land and given name Wat Sunnataram Forest monastery in 1990 AD ( 2533 BE), in the same year, there were five monks residing in the place. In 2006, Venerable Upatissa spent rains-retreat and in 2008, I myself ( Sumanakitti) arrived in Sydney as invited by Thai-Australian community. This was also another prospect that helped people come to practice Buddhism as well.

However, the history of Australia dates back to 50,000 years where the aboriginal people lived. Although, known as non-Buddhist country and just discovered in 18th century, but believed that unrecorded evidence of Chinese Buddhist merchants crossed this land earlier than westerners’ arrival to this land. Later on, the first Sri-Lankan Buddhists arrived in Australia during the British Empire.

Note: Patimokha means ‘Disciplinary code’ is the name of the code of monks’ rules which on all full moon and new moon days is recited before the assembled community of fully ordained monks,Bhikkhus.