The Birth of the Buddha, Peacemaker for the World;

The Significance of Visakha Puja Day

On behalf of The Council of Thai Bhikkhus in the U.S.A., as the Secretary of the Council, I would like to join in this year’s Visakha Puja celebration.  This year Vesak is especially significant because it is the commemoration of the 2600th anniversary of the Enlightenment of the Buddha.  Under the auspices of the Mission of the Republic of Sri Lanka to the United Nations and of the United Nations General Assembly, special events have been planned in New York to celebrate this auspicious occasion.

Today Vesakha Puja is recognized as an international day of celebration of the life of the Buddha.  This May, 2011, we have the Vesak ceremony in all the Buddhist countries, Thailand, Vietnam, Laos, Cambodia, Sri Lanka, Japan, Korea, China, and others.  In fact, Visakha Puja is celebrated across the globe.

It was not always this way.  When Anagarika Dharmapala, arguably the greatest preacher of Buddhism in modern times, was a boy in the 1870s in his native Sri Lanka, then the British colony of Ceylon, he was caned by the headmaster of the Christian school he attended for taking off to celebrate Vesak.  It was the same Dharmapala, however, who in May of 1897, following the World Parliament of Religions four years earlier, presided over the first Vesaka Puja celebration in America in San Francisco.  Then in 1999, sixty-six years after the death of the great Buddhist preacher, Visakha Puja received the worldwide recognition it deserves.  On December 15 of that year at the behest of the country of Sri Lanka, Dharmapala’s homeland, the fifty-fourth United Nations General Assembly declared Vesak Day, the full-moon day in May, an International Day.  Buddhism was recognized as one of the oldest religions in the world, a religion that should be praised for its concerns about the welfare of human beings.

Visakha Puja commemorates three important events in the life of the Buddha, all occurring in different years on the full-moon day of May: his birth, his Enlightenment, and his passing away.  These events can serve as lessons for us today.

I would like to begin with the event of his birth.  After the Buddha was born, he walked seven steps and said, “I am chief in the world, I am best in the world, I am first in the world. This is my last birth. There will be no further rebirth.”  This statement expresses the Buddha’s aim in his life. His words are not just the silly boasting of a child.  Rather, they signify that we are all individually responsible for what we make of our lives.  Think about that. Do you take this responsibility seriously?  If you do not, you should reflect on this matter today.

Let us talk about the second event commemorated on Vesak.  After the Buddha achieved Enlightenment, he said to himself, “Through the round of uncountable births, I wandered without finding the house builder I was seeking.  Rebirth again and again is painful. House builder; you are seen!  You will no longer build my house.  All your rafters are broken.  The ridge pole is destroyed.  Mind attains the unconditioned.  Mind achieves the end of craving.”  The Buddha recognized what causes problems for us. We should also recognize that the problems we encounter come from inside the mind.  The problems start there—with our thoughts.

The third event recalled on Vesakha Puja Day is the Buddha’s passing away.  Before he passed away, he told his disciples, “All component things are subject to decay and destruction, work out the real freedom with earnestness.”  These were the last words of the Buddha.  We should work hard to understand that nothing in life is permanent, that nothing can be counted on, so that was can free our minds from greed, hatred, and delusion and thereby attain peace and freedom.

The message of Visakha Puja Day is a message of loving-kindness and compassion that bring peace.  We celebrate Vesak day, or the Buddha’s day, because of his great loving-kindness and compassion not only to the Buddhist people but also to all the people of the world. The Buddha was a great man who walked on the earth and preached to the people 2,500 years ago about how to live happily and peacefully.  After he realized the truth, he did not keep it to himself; he spread the truth for forty-five years of his life.  That is why we gather together and celebrate on this day.

Visakha Puja Day commemorates the birthday of the Buddha as the arising of the Buddha to bring peace.  The Buddha-to-be was born into the Brahmin tradition, but he left this tradition behind.  He tried to get rid of all unwholesome things inside and outside people, for example, the castes in the society of his time.  He traveled throughout the Middle Area for forty-five years teaching people, and then he passed away in final Enlightenment.  He visited the poor, his enemies (for instance, Devidatta), and kings because of his great compassion and because of his wisdom.

The message of Visakah Puja Day is also that of overcoming egoism.  The Buddha worked without egoism, giving people the opportunity to light the inner light in their hearts and reach their final goal.  He found truth and liberation and destroyed egoism.  He destroyed all the defilements in his mind and found freedom from the self.  As a result, he can help society today find its freedom and can teach society liberation from the self.  He can enable society to find peace.

At Visakha Puja the birth of the Buddha is celebrated in two senses: the Buddha-to-be’s being born from the womb of his mother, and the Buddha’s being born as the Awakened One, having destroyed the defilements, especially egoism, atta.  The Buddha has the answer to the question of how the people of the world can attain inner peace.

Practical worship is truly the way in which egoism is overcome.  The Buddha wants us so to practice so that we can benefit from his teachings and free ourselves from suffering.

The Buddha’s overcoming of egoism means that he woke up.  The word Buddha means to wake up and to know.  Last month a husband and wife took their children to the temple.  When they saw the monks, they paid respect and told their children to pay respect, but they called the monk, “my Buddha.”  I did not have a chance to explain to them that they should not call the monk “Buddha.”  The more I think about what they said, however, the more I realize that they were expressing a great truth.  They are reminding us to be the Buddha, that is, the Awakened One, insofar as we wake up from the sleep of ignorance, greed, hatred, and delusion.

There is a story about the Buddha after he achieved Enlightenment.

He decided to go teach at Varanasi.  On the way to Varanasi, one Brahmin asked him, “Are you a god?”

“Then what are you?”

The Buddha answered, “I am awake.”

The Buddha defined himself as the one who had woken up.

As we celebrate this Visakha Puja Day, then, we do not forget the Buddha, but we follow his advice as his disciples.  Learning something from our great teacher, we build the Buddha within our minds.  It is never too late to change our ways of thinking, speaking, and behaving, ways that cause us problems.

Let us spread loving-kindness and compassion.  Let us overcome egoism and wake up.  These are the ways to find the Buddha’s peace.

The Secretary General of the Council of Thai Bhikkhus in U.S.A. 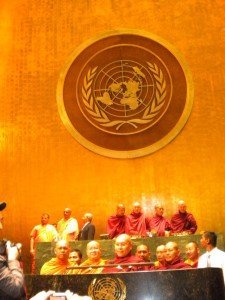 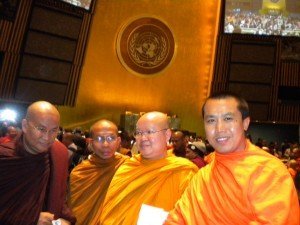 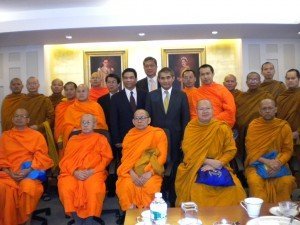 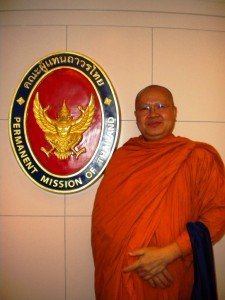 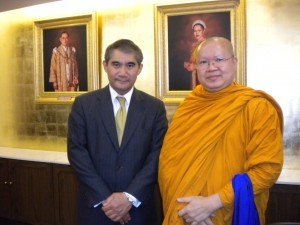 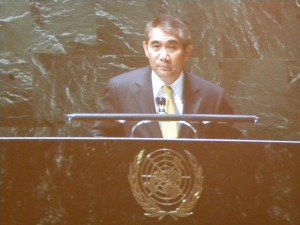 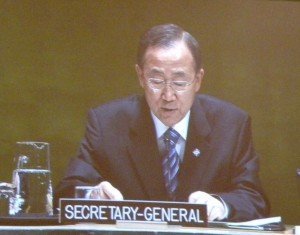 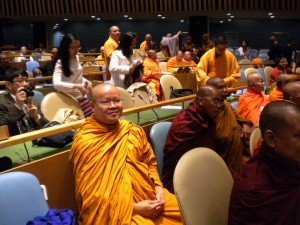 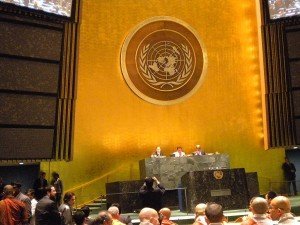 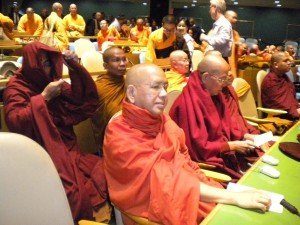