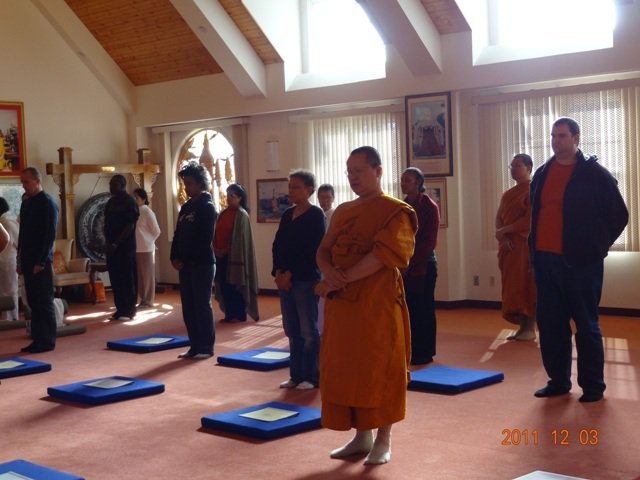 The Four Noble Truths. Avoiding the two extremes, the Buddha, therefore, asked his followers to take the Middle Way, which “opens the eyes and gives understanding, which leads to peace of mind, to the higher wisdom, to full Enlightenment.” In fact, according to the First Noble Truth, life is subject to “suffering.” This is the quotation that fits here: “Now this is the noble truth of suffering: birth is suffering, falling into a lesser condition is suffering, sickness is suffering, death is suffering, connection with things one dislikes is suffering, separation from things one likes is suffering, not to get what one wants is suffering. In short, the five aggregates of clinging are suffering.”
When these conditions are analyzed one by one, we can see how painful they are. Every one of us has to face these conditions in his journey through life. Impermanence is a fact that applies to everything. There is nothing born or conditioned which is not subject to this law. Hence the logic of the Buddha’s saying that whatever is impermanent is also painful. Thus even the so-called pleasures end in pain. This proves the truth of the statement that all conditions of life based on attachment are painful.
The Second Noble Truth is that this suffering is caused by ignorance which results in desire. All things and events are related as causes and effects.
There is nothing in the world as it appears to us which falls outside the cause-effect relation. So, like everything else, suffering has its cause, and that cause is found not outside us but within us. Now what is that cause? It is self-centered desire. Selfish desires are based on valuing everything in relation to oneself and show themselves in different forms: arguing, fighting, etc.
The Third Noble Truth is that this suffering can be gotten rid of by the removal of desire. We now know that selfish desire is the cause of suffering. When the cause is removed, the effect will naturally cease. When desire is destroyed, suffering will also come to an end. The end of suffering is the negative result, and reaching the bliss of Enlightenment is the positive result. In other words, along with reaching Enlightenment there will be an end to all suffering.
The Fourth Noble Truth is the path to get rid of suffering. One can, therefore, put an end to suffering by choosing as one’s own and following the path, the Middle Way, which for the Buddhist is the philosophy of life itself. The Middle Way of overcoming oneself which leads to the highest goal has eight parts.
This is the Noble Eightfold Path:
1) Right Understanding,
2) Right Thought,
3) Right Speech,
4) Right Action,
5) Right Livelihood,
6) Right Effort,
7) Right Mindfulness,
8) Right Concentration.

The whole teaching of the Buddha, to which he devoted himself for 45 years, deals with this Path. Buddha explained the Dhamma in different ways with different words to different people, according to the stage of their development and their capacity to understand and follow him, but the essence of those many thousand discourses scattered hi the Buddhist Scriptures are found hi the Noble Eightfold Path and summarized hi the Threefold Doctrines namely;
1. Not to do bad
2. To do good, and
3. To purify the mind from its impurities or mental defilement

Wisdom Training:
Wisdom is the way to see the ultimate truth of reality. When the mind of the meditation practitioner becomes calm, dear and peaceful, he or she may apply peaceful mind to look at the ways of all thing visible and invisible as they really are. Their ways are as follows;

1) Impermanence means that nothing in this world is permanent. Everything that we see around us seems the same but is actually in a state of constant flow. The flowers that bloom today will dry up tomorrow. Impermanence is a law of the universe which nothing can escape, from the stars and plants to the smallest living things on earth.
2) Suffering is the second of the main characteristics of existence. The word dukkha is translated into English as suffering, sorrow, or unsatisfactoriness. The First Noble Truth can be summed up in this one word. The cause of suffering, as seen in the Second Noble Truth, is desire—the craving for sensual pleasures, for existence, or for self-destruction. By the complete removal of desire by man’s own conscious efforts, the Buddha taught that man can reach absolute peace and bliss, Enlightenment. The Buddha taught the existence of suffering, but he also taught the way out of suffering. He not only determined what the sickness is, but he also described a practical cure—the practice of the Eightfold Noble Path. “This above all do I teach,” he said, “suffering and the way out of suffering.”
3) No-self is the teaching that there is no permanent being in man which can be called a self or soul. The so-called “self” or “I” is made up of five groups of attachment, the five aggregates. These are body, sensations, perceptions, intentional activities, and consciousness. Just as the word house is but a way of taking about bricks, wood, and other building materials, even though in the truest sense there is in reality no one separate thing that is a house, so in exactly the same way the words living being and ego are but ways of talking about the five groups of attachment.
The value of understanding the three characteristics of existence lies in progress made toward lessening one’s attachment to material objects, mental concepts, and the existence of the senses in general. In this way we go beyond avoidable suffering and unhappiness.

When the mind understands the way of everything as it really is, the mind does not cling and does not attach to anything one will see and view all things with a realistic approach. At that level of meditation the mind becomes free from all kinds of mental defilement, becoming a mind that can be called free mind, independent mind, perfect mind or enlightened mind. The person who lives with this mind will always live his or her life in peace and happiness here and now, not waiting until after death. This is what the Buddha taught and the goal of Buddhism.